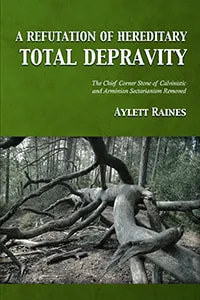 A Refutation of Hereditary Total Depravity by Aylett Raines

Aylett Raines (1798-1881), as a young man, began preaching the doctrine of Universalism. While preaching in the Western Reserve he encountered Walter Scott and went to hear him preach, intending to challenge him to a debate afterward. However, he found that he could not oppose what Scott had taught. After further study, he became convinced of the truth and was immersed into Christ. Raines then proceeded to preach the gospel with men like Walter Scott, Thomas Campbell, and Alexander Campbell.

A Refutation of Hereditary Total Depravity is an opposition to the Calvinistic doctrine of original sin. Alexander Campbell gave the following introduction to this book: “This faithful and laborious fellow-laborer in the kingdom of our common Lord and Savior, has found how much the notions and speculations, designated ‘total depravity,’ have operated against the reception of the gospel, and with great intellectual vigor has laid the mattock to the root of this tree. He has not merely cut it down, but eradicated its bitter roots from the soil; so that I think it will never germinate in the mind of any one who gives this volume a candid and faithful perusal.”