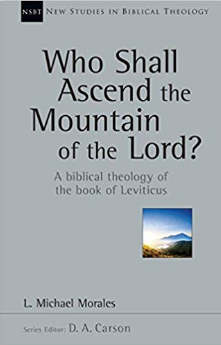 Who Shall Ascend the Mountain of the Lord by L. Michael Morales

Preaching's 2017 Survey of Bibles and Bible Reference Reformation 21's 2015 End of Year Review of Books "Who shall ascend the mountain of the LORD?" ―Psalm 24:3 In many ways, this is the fundamental question of Old Testament Israels cult―and, indeed, of life itself. How can creatures made from dust become members of God's household "forever"? The question of ascending God's mountain to his house was likely recited by pilgrims on approaching the temple on Mount Zion during the annual festivals. This entrance liturgy runs as an undercurrent throughout the Pentateuch and is at the heart of its central book, Leviticus. Its dominating concern, as well as that of the rest of the Bible, is the way in which humanity may come to dwell with God. Israel's deepest hope was not merely a liturgical question, but a historical quest. Under the Mosaic covenant, the way opened up by God was through the Levitical cult of the tabernacle and later temple, its priesthood and rituals. The advent of Christ would open up a new and living way into the house of God―indeed, that was the goal of his taking our humanity upon himself, his suffering, his resurrection and ascension. In this stimulating volume in the New Studies in Biblical Theology, Michael Morales explores the narrative context, literary structure and theology of Leviticus. He follows its dramatic movement, examines the tabernacle cult and the Day of Atonement, and tracks the development from Sinais tabernacle to Zions temple―and from the earthly to the heavenly Mount Zion in the New Testament. He shows how life with God in the house of God was the original goal of the creation of the cosmos, and became the goal of redemption and the new creation. Addressing key issues in biblical theology, the works comprising New Studies in Biblical Theology are creative attempts to help Christians better understand their Bibles. The NSBT series is edited by D. A. Carson, aiming to simultaneously instruct and to edify, to interact with current scholarship and to point the way ahead.